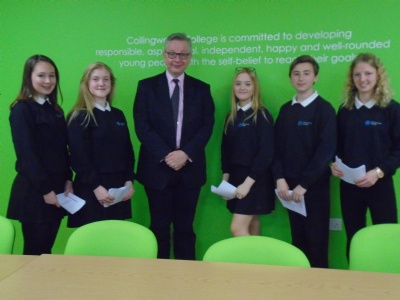 The College, on behalf of the Citizenship Department, was delighted to welcome the Rt Hon Michael Gove MP for Surrey Heath on Friday 11 May, to discuss with students specific political areas that three groups of Years 9 and 10 students had researched.  Mr Gove clearly took this very seriously as he had two of his researchers, and an intern, accompanying him.

Year 10 students, Mollie, Liam, Emily, Shayna and Natasha, were first and gave a presentation on why the Government should lower the voting age from 18 to 16.  Not only did they give a thorough, well-reasoned, and well-practised presentation in front of our distinguished Cabinet Minister for the Environment, but they also responded with quick-thinking when Mr Gove questioned them as a Devil’s Advocate. The group was very well informed.

Mr Gove was reminded after this 15-minute spot that the group wanted to know whether he was going to support this point in Cabinet, and he indeed said that he was “more in favour after the presentation than he was before.”

Oliwia, Finn and Tia, also from Year 10, followed, delivering a presentation about raising government funds available for Legal Aid.  In a powerful speech about the iniquity of justice procedures, where the outcomes of trials often depended on how wealthy the defendant is, students also gave a good case study, which impressed our MP.  He said these were persuasive arguments that he would take to his Cabinet Colleague Justice Secretary.

Emily, Lucy and Sammy, from Year 9, impressed Mr Gove with their argument on the lack of education funding, giving examples of the need in Collingwood for new books, repairs to the fabric of the building, and also saying it was “not right” that parents should be asked to contribute to school funds, as had recently happened at Collingwood.

Mr Gove replied that education funding had indeed risen in the lifetime of the present government, but did admit that there had been an increase in school populations, and that the additional funding was not going far enough.  He added that in the present government, even in times of recession, they had prioritised health and education.  He added that he had every admiration for how well Collingwood was performing in spite of everything.

This was a remarkable opportunity for the GCSE citizenship students, not only to hear from their MP, but of course also a very senior member of the Cabinet, and all have benefitted enormously. As Shayna commented afterwards:

“Our experience was definitely unforgettable.  We worked very hard preparing our presentation and it all paid off.  Mr Gove was extremely charismatic and asked of us a lot of questions towards the end.  He said that we managed to sway his views from what we said when he walked in saying [he] “didn’t have any strong views on this subject.”  He and his team said we were all very articulate, and were grateful to see us all there, as well as saying that he “would allow all of us the vote!”"

Commenting to Mr Tanner afterwards, Mr Gove said the students he spoke to were “Excellent”.