Collingwood’s own Year 10 footballing genius crowned what has been a magnificent year for him this week by being presented with his official Welsh caps by Wales and Liverpool legend Ian Rush.

In the timespan of just under two years Year 10 student Oli Ewing has gone from playing grassroots football, to being signed by prospective Premier League club Fulham FC, being selected for Wales FA Schoolboys and then being made their Captain at his age group of Under 15.

Oli’s rise in the game comes as no surprise to the experts.  Recognised as a huge talent before signing with Fulham it was a matter of what club he signed for rather than whether he signed for a club.

Fulham won the race, Oli was then granted release from College to train with them during the week on particular afternoons and his game has gone from strength to strength this season.

The initial selection for Wales and then to be made captain of the squad epitomises Oli’s hunger to succeed.  His work ethic on the pitch is an example to those around him.  In the past year Oli has captained the Under 15’s in a triangular tournament against Belgium and Switzerland (hosted by the former), played in Brittany against a representative side there and also recently in Slovakia in a double header against the host nation winning both games.  Amazingly after the latter Oli dashed home and took an immediate train from Birmingham Airport to make the District Cup Final, coming on as a late substitute and changing the game in the last 20 minutes to help the Year 10 team lift the District Cup for the third time in four years. 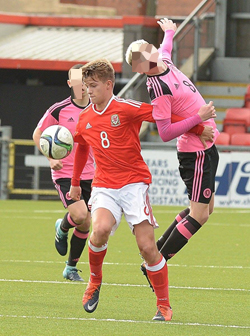 During the course of the past 12 months his outstanding performances in the Welsh red shirt also earned him a call up to the Under 16 squad to play against some of the home nations in the prestigious Victory Shield competition.  You can see Oli battling against a Scotland midfielder in one of the photographs.

To cap off an amazing month Oli also represented the Aldershot and District Under 15 side in the National Final held at Stoke FC, assisting them to a 3-0 win.  In this game he also picked up the man of the match award before dashing back with his Year 10 counterpart Jakob Carl to sit their PRC Exam later that day!

Despite his accomplishments, Oli remains grounded and has a mature head on young shoulders, something which will only stand him in good stead for the bright future ahead of him.  He is admired by the younger students (some Year 7’s want to sit in his seat in some classrooms!), and respected by his peers and that is testimony to his character.

Everyone at Collingwood hopes that 2018/19 will be as successful a season for Oli as in the past two years.  We will keep you updated on Oli’s progress, but remember the name EWING and keep an eye on the back of those Premiership football kits for it!!