Over 50 students took to the slopes in February for our annual ski trip to Killington.

uring the February half-term the annual ski trip to Killington, USA took place.  Thanks to the many meetings in the run up to the trip and a really successful Instagram account, the trip itself felt like it had already begun by the time we left for the airport.  Staff had got to know the students and vice versa.  The party endured a seven hour flight followed by the five hour coach transfer which allowed the students plenty of rest time before the first day of skiing.

After a swift ski and helmet fit the students headed onto the snow for the first morning's skiing where they met their instructors and began to form bonds and make long-lasting memories.

The temperature on the first morning was perfect and this allowed the beginners to progress nicely.  Hitting the lofty temperature of -7 meant that all were a touch cold on what turned out to be the warmest day and conditions were fantastic.  Having received 9 inches of snow prior to our arrival the snow conditions were perfect. 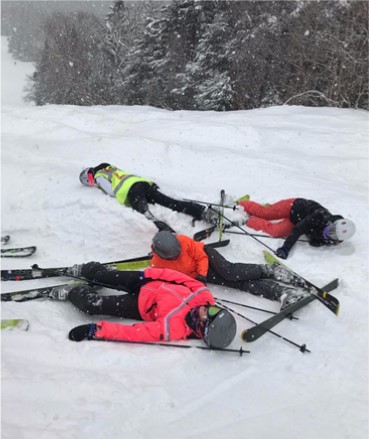 All survived the first day.  There were a few crashes and falls (mainly the staff and Roy's group) but the learner bib went to Abby Prince who wore it with pride the next day.

By the end of a slightly colder second day it was clear that the whole group were progressing fast but the most pleasing thing to see was just how many students wanted to do the extra skiing sessions with Mr San and Mr Cleary.

Day four came and the conditions were brutally cold.  When various hardened skiers have to come in for a hot chocolate you know it’s cold!  There were still 21 students that braved the temperatures to take on the extra skiing.

The final day came and it was evident to see the phenomenal progress that the students had made and particular credit should go to the three beginner groups, one of which ended the week by skiing a tough black diamond trail (I am not sure they knew though!).

At the end of the skiing the whole group visited the tubing park at the local golf course and before long everyone was loving it.

Throughout the week the evening entertainment was varied.  On three different evenings the swimming pool was utilised.  On the first full day there, the most successful excursion was to Walmart where their share price rose by $1 with all of the junk that the students bought!  On the third evening the staff hosted the Collingwood Quiz.  Whilst there was the usual general knowledge there were a number of interesting questions thrown in, but the shock winners, due to being the smallest team, included Issy Little, Marnie, Cameron and Jasmine.  Though they may have had a touch of help.

Bowling was again a popular night out, the star performer being Miss Robinson who started off strike, strike, spare, strike and ended up with the highest score!  Some of the students were slightly more excited by the purchase of 50+ donuts from Dunkin Donuts next door.

Over our time in the resort there were many golden envelopes up for grabs.  Toby’s room were delighted to win the first night’s envelope.  They were even more excited when they realised that they had a staff member as a slave for the following day – who to be fair they treated very kindly.  I am not sure it would have been the same if it had been the other way round.  There was an envelope where the staff could have got slaves for the day but thankfully (for them) no-one selected that envelope.

The time at Killington had come to an end, sad goodbyes were said to the instructors and the journey to Manhattan began with a stop for some bargains at Woodbury Common Shopping Outlet. 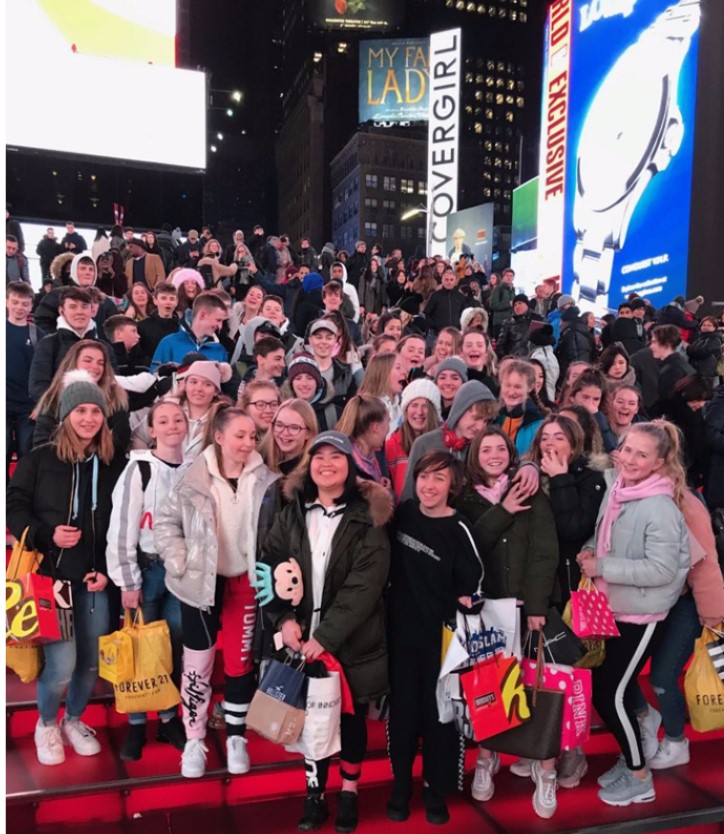 Moods lifted when students saw the bright lights of New York and Times Square.  Here the shopaholics like Taila and Jess really had a field day.  Footlocker, American Eagle and Forever 21 really didn’t know what hit them but the real highlight of Times Square was the photo in front of the US Flag just off the square.

After dinner at Planet Hollywood we trekked downtown to the Empire State Building to soak in the sights and views from 90 stories up.

Considering the relatively poor visibility when we arrived, we were extremely lucky to have a beautifully clear night and it was an amazing experience. 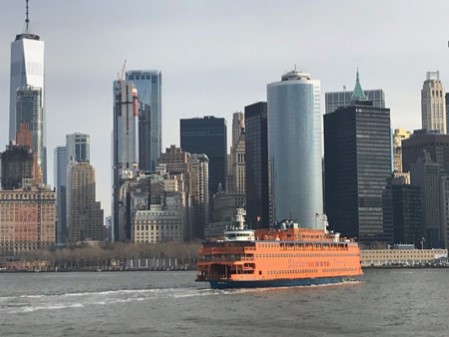 The next morning there was no rest for anyone as we checked out of the hotel by 7.30am and were on the 9.00am Staten Island Ferry to catch sight of the Statue of Liberty and savour the Manhattan skyline. 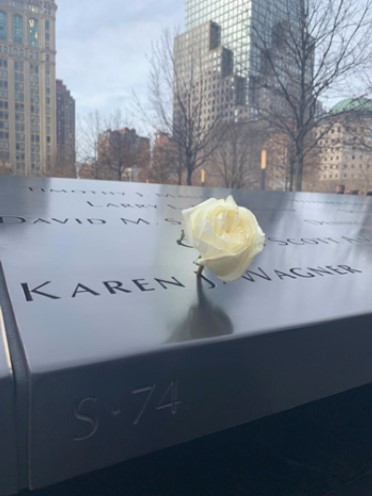 When we returned to dry land we walked to the 9/11 memorial and as a group we politely paid our respects to those that lost their lives in the attack on the twin towers. The two waterfalls designed and shaped in the foundations of the two towers are truly wonderful, even if the area itself was somewhat understandably eerie.  Many roses placed beside the names of the victims who should have been celebrating their birthday put into perspective just how many innocent people lost their lives on that day.  The students conducted themselves with such dignity inside the museum, many of them learning for the first time stories surrounding the events of that tragic day.  A proud but at the same time sad moment. 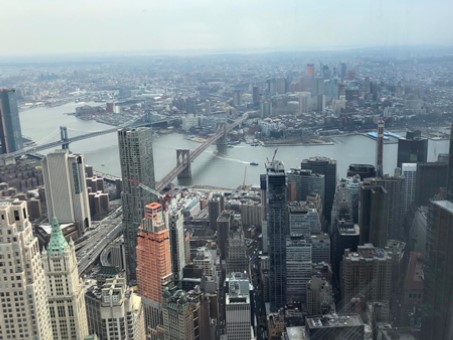 ith a couple of extra hours in New York to spare due to later flights, the students then split into two groups.  One group went up the One World Trade Tower whilst others marched onto the Brooklyn Bridge.  Remarkably the group in the tower could just about make out the other group on the bridge due to the amazing view.  The remainder of the day was spent shopping on Fifth Avenue and when we met at 5.30pm to head to the airport everyone was all shopped out.  During the flight home many took the opportunity to gain some well earned and well deserved rest and the students all arrived back to meet their parents on time in Terminal 5.

In many years of running the trips this was comfortably one of the most enjoyable I have ever had – made easy by an amazing group of young people and the hard working and dedicated staff who accompanied me. That is testimony to the personality of the students who went and I want to thank each and every one of them on behalf of my five colleagues for making this a fabulous trip.  For those that want to view more photos and videos go to @collingwoodkillington and check out the Instagram account.