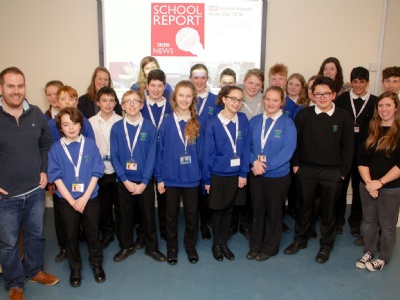 Years 7 to 10 students participate in the BBC News School Report.

Last Thursday (10 March) saw Collingwood’s gifted and talented students take part in the annual BBC News School Report.  The day saw twenty students take on the role of amateur journalists, reporting on topical issues such as gender equality, gun control and our amazing students for whom English is an additional language.  Armed with cameras and a brain full of ideas students went out into the journalistic field, interviewed members of staff and created news reports worthy of their amateur student status.

After editing their videos and recording Newsnight style radio debates in Mr Middleton’s media suite, their efforts were uploaded to the Collingwood specific BBC School News Report webpage and linked to the BBC News webpage itself.

The day was topped off by a visit – organised by Dr Jones and her GCSE journalism class – from the BBC World News Digital Editor, Bethan Jinkinson, who gave a wonderful presentation on the future of news journalism.

Thank you so much to Mr Middleton, the library staff and to the teachers who took time out to be interviewed by the students.  The day was a great success and hopefully will become bigger and better next year.  Finally a massive thank you to the students who went about the whole day with such enthusiasm: