Year 8s Take in the Wonders of Italy

45 Year 8 students had a fantastic, fun-filled and very interesting week during half term on the Geography trip to Italy with Miss Evans, Miss Morgan, Mrs Wiles, Mrs Edwards and Mr Magness.

Day one (Monday 30 May) began with a very early start leaving Collingwood College at 4.00am to catch an early flight from Heathrow to Rome.  Upon arrival the students were checked in to Hotel Noto, Rome, and went straight out on a sightseeing tour of the city.  Highlights of the tour included the Trevi fountain, the largest Baroque fountain in the city; the Piazza di Spagna and Spanish Steps with the Barcaccia (‘sinking boat’ fountain) at the foot of the steps; the Pantheon building, a 2000 year old temple with the largest unreinforced concrete dome ever built and the Piazza Navona, home to Bernini’s Fontana dei Quattro Fiumi, an ornate fountain featuring personifications of the rivers Nile, Ganges, Danube and Plate.

A guided tour of the Colosseum impressed the group on Tuesday.  This was followed by a guided tour of Palatine Hill (where Romulus supposedly founded the city in 753 BC.) and a guided tour of the Roman Forum.  After lunch, the group walked to the Vatican City.  Here, they were able to walk through the Galleria degli Arazzi (Tapestry Gallery) and the Galleria delle Carte Geografiche (Map Gallery), a 120 m long corridor hung with forty 16th Century topographical maps of Italy.  They then entered the Sistine Chapel and were able to gaze at the huge painting by Michelangelo.  After being packed onto a busy metro train to travel back to the hotel, the group were then ready for a delicious dinner at the pizza restaurant! 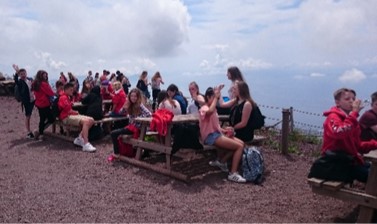 On the third day the group travelled to Mount Vesuvius, the only volcano on the mainland of Europe to have erupted within the last 100 years.  It last erupted in 1944 but is best known for its eruption in AD 79 that led to the burying and destruction of the Roman cities such as Pompeii and Herculaneum.  It is still considered to be an active volcano so the students were very excited to be able to see small amounts of steam from vents in the crater as they walked up and around the top of the volcano.  After lunch, the group travelled to Pompeii to witness the amazing excavated sites of the ancient Roman town which included houses, temples, shops, cafes, bath houses and amphitheatres.  They also saw some of the casts of the people who used to live in the city. For Phoenix Govey-Gray and Lewis Collin, “Pompeii was the highlight of the trip.” 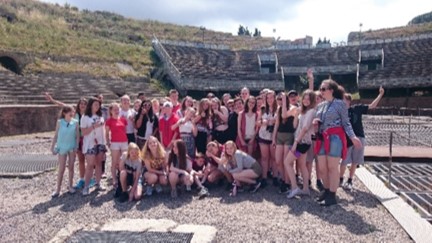 hursday 2 June was another packed day with the group exploring the Flavian Amphitheatre in Pozzuoli.  Here, Miss Morgan entertained the students by pretending to be a wild animal in the underground section of the theatre! 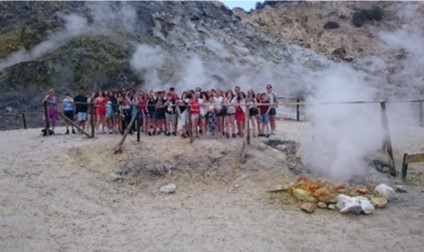 The group then travelled to Solfatara, which is a shallow volcanic crater at Pozzuoli.  It is a dormant volcano, which still emits jets of steam with sulphurous fumes, so many ended up walking around the site holding their noses when walking past fumaroles.  After lunch, the group went to visit Herculaneum and were particularly amazed by the skeleton remains still visible in the boat houses.

William Cottam commented that the trip had been a “great opportunity” and that they “had an amazing time with all the other students and teachers.”  The trip was summed up beautifully by Lauren Coles: “Italy was one of the best experiences of my life.  I don't think I have ever been on a trip so action packed!  It was a perfect balance of learning and fun; I learnt so much about the places we visited.  I think my favourite destination was Mt Vesuvius; it was so beautiful.  With the amazing teachers and outstanding itinerary, it made for a perfect trip. I already miss it so much!”